Many of you will have read the New 52 Future's End #0 given away at Free Comic Book Day (if you missed out, you can read it for free at Proud Lion Digital).

This series has continued with a weekly comic that launched earlier this month. The story shows us a horrific future for DC's New 52 - one where a machine called Brother Eye is trying to assimilate all of humanity and only a few superheroes have been able to fight back. In a final desperate gambit, Batman is able to send his protege Terry McGinnis (the Batman Beyond in his New 52 debut) back in time to try to prevent the activation of Brother Eye. There's also storylines involving Grifter, Firestorm and a fairly fateful encounter for Green Arrow...

In September 2014 - for one month only - the entire New 52 line jumps forward five years to show us your favourite DC characters in this new future. 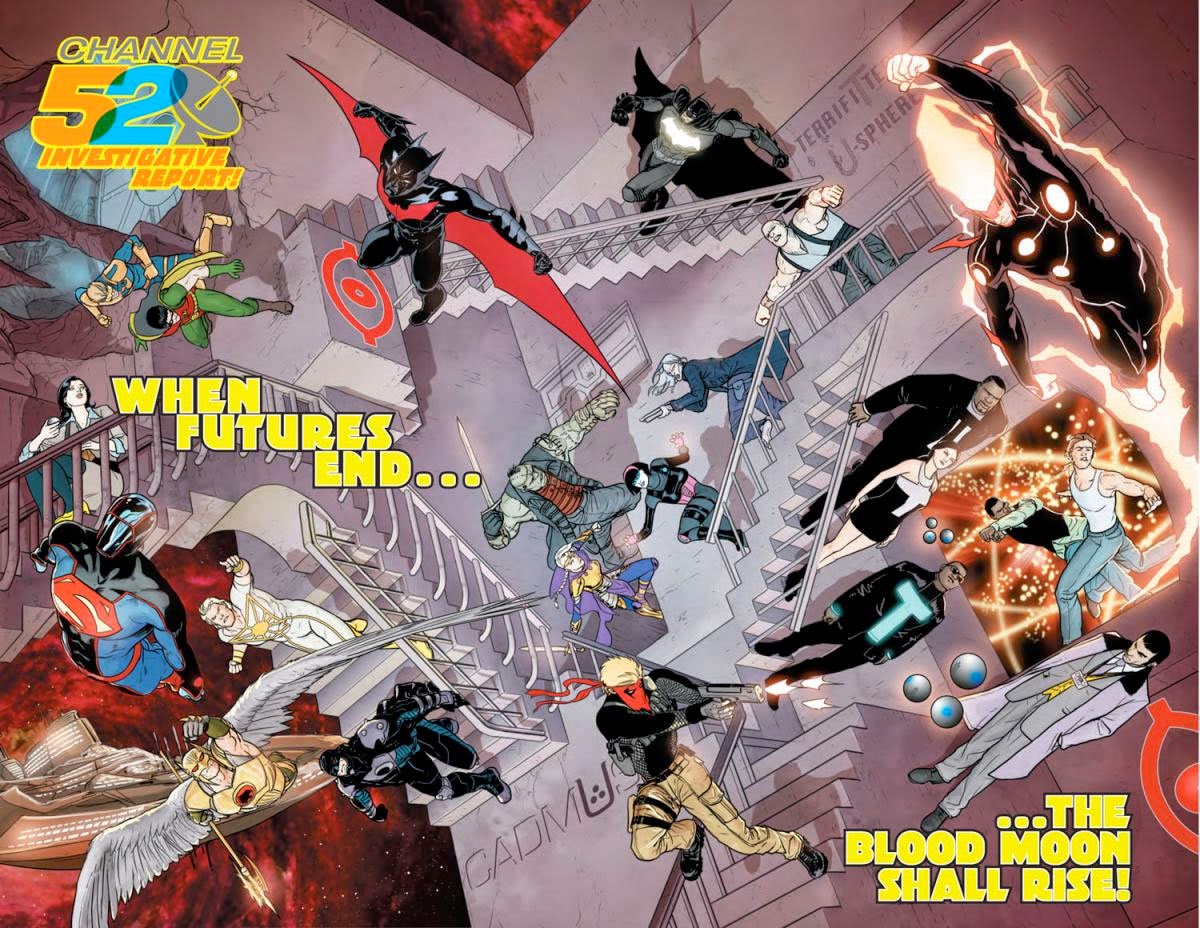 As before though, enough hype, here's the rub. There are 3D and 2D covers for each of these issues and DC have announced that the print run for these comics will be set at the point where we place our Previews order. In a nutshell this means that there will most likely be NO RESTOCKS for these comics. Once again, we have to get this right first time. We won't be able to guarantee any order adjustments after the Previews order is sent in.

Here's what we're going to do here at Proud Lion. All normal DC New 52 comics Reservations will be filled with the New 52 Future's End 3D cover of your chosen title(s) in September. If you're happy with that, you don't have to do anything.

If you'd like to downgrade to the 2D cover or amend any of your order for that month only (maybe you read Batgirl regularly, but have no interest in that Future's End issue of Batgirl?), please contact me by 5pm on Wednesday 21st May.

If you'd like to order anything extra, please let me know by 5pm on Wednesday 21st May. You can download a pdf order form here, which you can print off and bring into the store, or you can email me your order at shop@proudlion.co.uk. Those orders will be binding once placed; please honour your commitments.

We will be ordering very little for the shelves, so please don't rely on the shelf stock to fill your interest. If you want it, please order it! I'm afraid that's the only way we can do this.

Non-Reservation Service customers can also use this form to place orders, however those orders will be subject to a deposit of the full cover price I'm afraid.

One final special offer though, anyone who wants all 41 of these comics can order the Proud Lion Future's End Month Bundle Deal. You'll get all 41 comics for £100 (saving you over £30 off the normal total price)! Please note that to secure your Bundle Deal order, you will need to pay a £25 deposit by Wednesday 21st May. We can invoice you via PayPal if that helps.

Here's a look at the solicitations, plus the cover images that have been revealed so far. 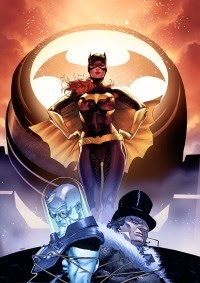 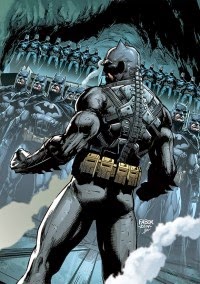 BATMAN: FUTURES END #1
Writer: Scott Snyder & Ray Fawkes
Penciller: Aco
Inker: Aco
Cover: Jay Fabok
It’s five years later and Bruce Wayne is using dangerous science to help him continue his war on crime. What is it, and what forced Bruce to resort to such extremes? 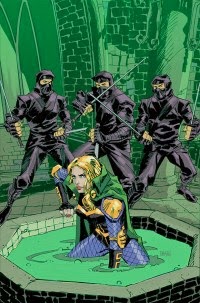 CATWOMAN: FUTURES END #1
Writer: Sholly Fisch
Penciller: Patrick Olliffe
Inker: Tom Nguyen
Cover: Terry & Rachel Dodson
Catwoman’s battle to be kingpin of crime in Gotham City takes an unexpected turn when Selina and Black Mask are revealed to be one and the same! 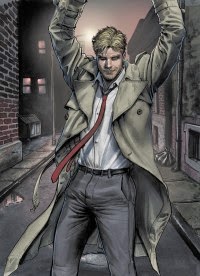 THE FLASH: FUTURES END #1
Writer: Robert Venditti/Van Jensen
Penciller: Brett Booth
Inker: Norm Rapmund
Cover: Booth/Rapmund
It’s the final showdown between The Flash and his future self for control of the Speed Force – with Wally West’s life hanging in the balance!

GRAYSON: FUTURES END #1
Writer: Tom King
Penciller: Stephen Mooney
Inker: Stephen Mooney
Cover: Andrew Robinson
Branded a traitor, Dick Grayson has become the most powerful hero in the newly resurgent and dominant Mother Russia - and now, he must battle the Beast from the East in one final struggle for supremacy!

GREEN LANTERN: FUTURES END #1
Writer: Robert Venditti
Penciller: Martin Coccolo
Inker: Martin Coccolo
Cover: Billy Tan
Across the universe, the dead are rising - the Black Lanterns are back! Only one being knows what it will take to destroy them this time. 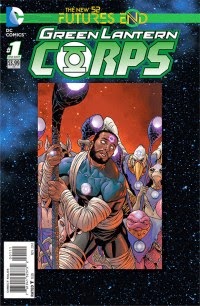 GREEN LANTERN CORPS: FUTURES END #1
Writer: Van Jensen
Penciller: Igor Lima
Inker: Ruy José
Cover: Francis Portela
John Stewart makes a fateful decision – will he choose to take his last shot at redemption? Or will he pull the trigger and kill any chance of a life worth living, in the name of saving the Corps?

GREEN LANTERN: NEW GUARDIANS: FUTURES END #1
Writer: Justin Jordan
Penciller: Dio Neves
Inker: Marc Deering
Cover: Dio Neves
The power of the White Lantern power has brought Kyle to the brink of death! Now, he must decide whether to release that power into the universe, or find another unsuspecting soul to take it on. 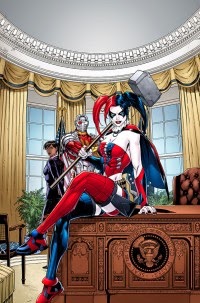 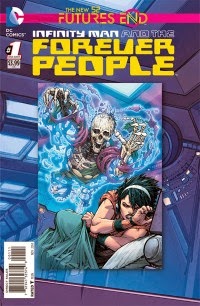 INFINITY MAN AND THE FOREVER PEOPLE: FUTURES END #1
Writer: Dan DiDio
Penciller: Philip Tan
Inker: Jason Paz
Cover: Howard Porter
Five years from now, the New Gods are missing, Infinity Man is trapped on Earth, and all is not as it seems in Mark Moonrider’s life. Is he living some beautiful dream, or is he stuck in a never-ending nightmare? 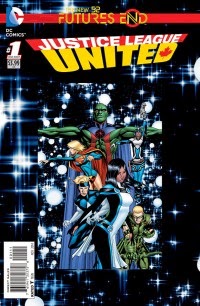 JUSTICE LEAGUE UNITED: FUTURES END #1
Writer: Jeff Lemire
Penciller: Jedd Dougherty
Inker: Jedd Dougherty
Cover: Mike McKone
In the concluding chapter of the epic story that began in this month’s JUSTICE LEAGUE: FUTURES END #1, the armies of Mars rise against the unsuspecting population of Earth – and only the combined might of the Justice League and the Legion of Super-Heroes can stand against them!

JUSTICE LEAGUE DARK: FUTURES END #1
Writer: J.M. DeMatteis
Penciller: Andres Guinaldo
Inker: Walden Wong
Cover: Juan Ferreyra
An emotionally and physically scared Zatanna struggles to find a way to return her team and the House of Mystery itself to our own dimension – but the cost might doom them and our world!

RED HOOD AND THE OUTLAWS: FUTURES END #1
Writer: Scott Lobdell
Penciller: Scott Kolins
Inker: Scott Kolins
Cover: Giuseppe Camuncoli
Red Hood rides solo in the future as he reveals hints to how the Outlaws and his partners Starfire and Arsenal parted ways and how that lead to Jason Todd’s new mission of retribution and brutal justice.

RED LANTERNS: FUTURES END #1
Writer: Charles Soule
Penciller: Jim Califiore
Inker: Jim Califiore
Cover: Scott Hepburn
The ranks of the Red Lanterns have grown to monstrous numbers, and with no Blood Lake to restore their sanity, they’re terrorizing the universe. It’s up to Blue Lantern Guy Gardner to correct the deadly mistake he made!

SINESTRO: FUTURES END #1
Writer: Cullen Bunn
Penciller: Igor Lima
Inker: Ruy José
Cover: Kevin Nowlan
Sinestro has been imprisoned by a powerful new intergalactic force with ideals based on a twisted version of his own code! Lost in a super-max prison on the far side of the universe, he orchestrates an escape… and his revenge! 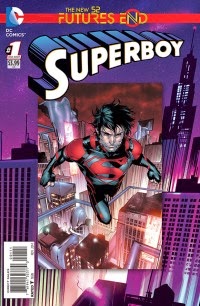 SUPERMAN/WONDER WOMAN: FUTURES END #1
Writer: Charles Soule
Penciller: Tom Raney
Inker: Tom Raney
Cover: Tom Raney
The battle between the God of War and Nemesis can only spell doom for humanity – but can Kal restore Diana to her senses before it’s too late?

SWAMP THING: FUTURES END #1
Writer: Charles Soule
Penciller: Jesús Saíz
Inker: Jesús Saíz
Cover: Jesús Saíz
The Avatars of the Green, Red and Gray go to war with the avatars of Bacteria and Metal! It's five years later, and Alec Holland is trying to mediate a ceasefire that could also be his last stab at reconnecting with humanity!

TRINITY OF SIN: PANDORA: FUTURES END #1
Writer: Ray Fawkes
Penciller: Francis Portela
Inker: Francis Portela
Cover: Guillem March
Pandora’s box has been reformed – but it can only be sealed from the inside! How can she make the ultimate sacrifice to safeguard the world against the deadly evils it holds? 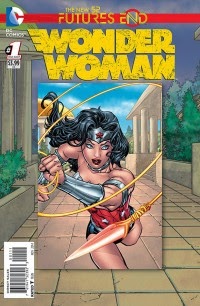 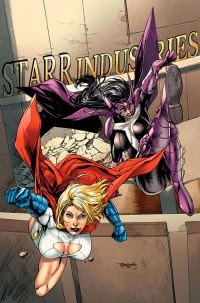