Occasionally, comic publishers like to do five week events in the longer months. A small miniseries, sometimes with a lasting impact.
These have often varied in quality, including Marvel's Maximum Security event in 2000 and the Amalgam crossover titles.
Marvel's newest offering concerns one Dennis Sykes – an ordinary man and a good husband; a man just trying to do his best with what life has dealt him with. He is struggling to be a father to his orphaned niece, is finding his job is making him the man that he never believed he would follow – his father. 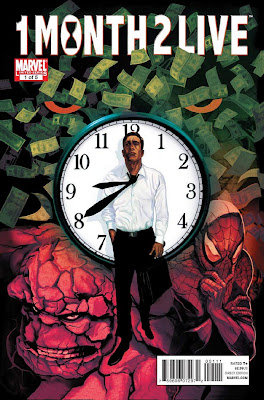 I feel Dennis is a very suitable window into the world of Marvel, a guy that any one of us could know or even be. He wants to break out, make a change, and stand up for himself for all the times when he never did.
In doing so his life takes a rather dramatic change.
He is defended and taken into care by a few familiar faces, during which time our protagonist is told that he has terminal cancer and only 1 Month 2 Live!
Once again he makes a stand and decides to not allow this to stop him living his life and make the most of the time he has left. He quits his job and goes home to try and build on his relationship with his niece/new daughter, during which time he discovers that cancer was not the only thing that the ‘accident’ gave him! With his new found powers he decides to amend a few injustices in his life and in doing so makes a few Spider-Man-like errors. These make him come to the conclusion that there are better ways for him to use his powers and time left.
The closing pages of this first issue show that nothing in life is straight forward and easy, you have to keep tending to wounds that run deep and build on bridges that you have already set upon.
It ends with a nice little teaser that indicates Dennis’s adventure is not over yet.
Stefan Harkins is also known as Harry Stamper. Amongst other things.
Posted by Proud Lion at 16:02 No comments: Links to this post

Hrm.
Clint is a new comic from Mark Millar, the comics writer that you either love or hate. He has been successful for years but is now tying to parley that fame into Clint, the first new British comic aimed at the newsstand for years.
In one of his press interviews about it Millar talked about there being no Eagle or 2000AD for this generation. And he's right, in a way. Comics aren't exactly the easiest thing to buy in newsagents. You need to be lucky enough to have a local comic shop, if you want anything outside of the licenced kids comics.
To wax lyrical, when I was growing up I had the tail end of Battle, Eagle etc then 2000AD and the Marvel UK releases. Comics were cheap and plentiful. 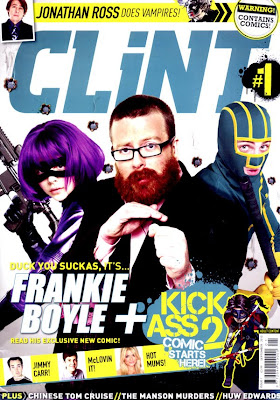 This is part of my issue with Clint. It's supposed to be a way to sneak comics into peoples hands, so it has a fair bit of magazine content as well. And this is content is, frankly, sub par Nuts or Front. A couple of token articles that looked ripped from Wikipedia, an interview with Jimmy Car and even a wordseach.
I admit it may not be aimed at me. Millar has very vocally said he's going for the 16-24 age group which I am (ahem) slightly outside of. But I still read comics and a UK based magazine like this is very interesting to me. Not when it's done like this, however.
I also think the real gap in the Market is somewhere between the kids comics and Clint. The Marvel UK comics growing up were a perfect stepping stone into 'proper' comics. Clint feels like it's trying to bring in new people but will the content here achieve that? Kick Ass is popular but is eight pages enough? Plastering the movie Kick Ass on the front alongside Frankie Boyle is a good idea to hook people in but will it get them to come back?
Maybe I'm asking for too much. Maybe I was expecting something else. I'm not sure.
As for the comics themselves, here's quick summary. Kick Ass 2 is only eight pages so too short to properly judge; Turf is reprinted as a whole and I like it; Nemesis is also the whole first issue, not much depth but looks great; Rex Royd by Frankie Boyle is a complete and total mess; the short three page story at the end is interesting but doesn't have a decent twist like a Future Shock from 2000AD.
I'm going to be back for issue two but it needs to improve an awful lot if its going to succeed as much as it wants to.
Phil Doyle is one of the creators of abadeducation.com and co-host of the sonicsring.com podcast. His real job is in insurance which he hopes won't be forever. He also has a complete set of Marvel 2099 first issues, even Ravage 2099.
Posted by Proud Lion at 15:33 No comments: Links to this post