Many moons ago on Joe’s Comics there was a new start called Ten Grand. Written by J Michael Straczynski. it’s a cracking little story about redemption and how far a man will go, but most importantly it was my first real introduction to the artistic work of Ben Templesmith, though many of our readers will remember his work from 30 Days Of Night and more. 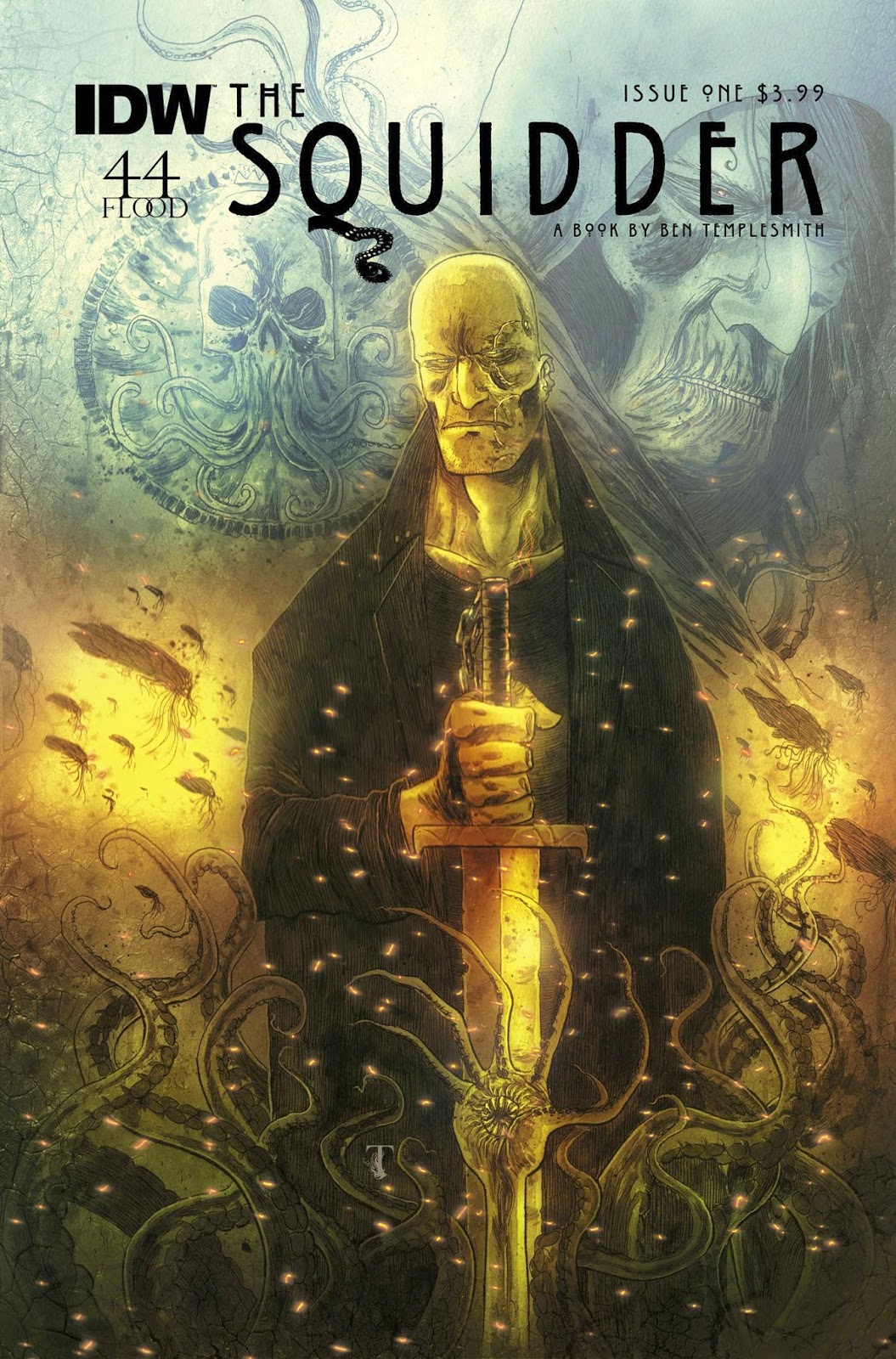 Templesmith may have left the comic after four issues but it was professionally handled and respectfully done by Straczynski meaning that regardless of the differences, workloads or other issues, there wasn’t a black cloud hanging over him for future projects.

Here we are now with one such future project – The Squidder – however this time the entire creative burden rests on his shoulders. More importantly this is the first part of a very personal project that suits Templesmith right down to the ground.

The Squidder is a bleak story in its kindest description. Opening with a cruel religious sacrificial ceremony, the reader is thrown right into the middle of civilisation's end. In an attempt to end the cycle of harm a young girl is offered up to appease the Squid Queen. One of many that has invaded Earth devastating the land and all those on it.

Hitchins, like many good protagonists, is a man troubled by his own violent past. Known as a Squidder, he was designed for the war against them. Physically strong and then further supported and enhanced by nanites and other technological doohickeys, it still wasn’t enough. In the end the war was lost and he witnessed plenty of death from those around him.

Being awoken from a nightmare isn’t a bad thing unless it’s to the hands of a hapless attempt at assassination. As a trained killer, seeing the attackers off is not hard at all but it does lead to an interesting meeting. Here is the crux of where this four part series is going. Hitchins is unimpressed at what he sees around him, but money talks and undertaking a mercenary contract to find and retrieve a priestess of the Squid Cult – alive – will make for an interesting ride. Brought to rescue what constitutes a traitor in his eyes and keep her alive. What could possibly go wrong? 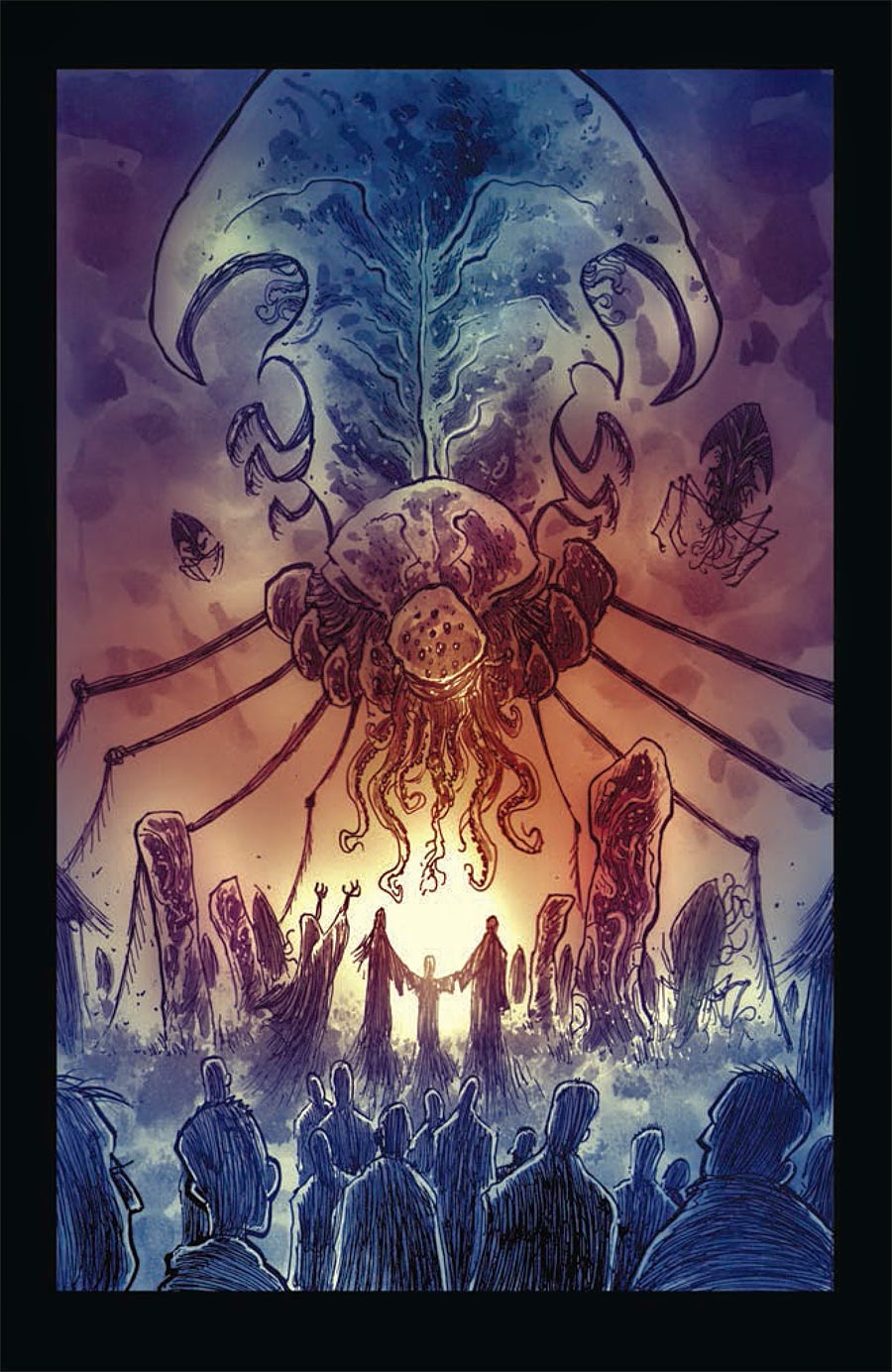 Templesmith’s artwork is exactly what I expected to see when I saw his name on the cover. It is fine lined, yet nasty and grimy at the same time. This is eloquently drawn horror, wrapped around a nightmare landscape.

Storywise it’s not bad at all. Maybe not the strongest of writing, but then again he’s not as well known for that outside of perhaps his Wormwood, Gentleman Corpse series. My one criticism is that sometimes the dialogue was confusing, with a person off camera speaking or being made reference to without being the focal point. This is certainly not a comic you can skim and take everything in so pay attention!

There is a very distinct apocalyptical feel to this without the normal nuclear side if that’s possible. Amongst all of the destitution and struggle I did feel that the overwhelming idea of the squids was missing in this issue aside from the futility of trying to beat them in flashbacks.

As a treasured project I think Templesmith has done well, considering that everything is done by him in its entirety. It’s a shame that it’s only four issues long really, though perhaps it's the first in a series of linked smaller miniseries. Time will tell, but this is definitely worth a look for all Templesmith and horror fans.

Matt Puddy once sacrificed something to the Great Squid. Now he'll never be able to grow a full beard.
Posted by Proud Lion at 12:00