The Proud Lion Christmas Gift Guide continues, and today we are moving on from the living dead and heading to Gotham City for a look at some of the best Batman - and other DC superheroes - gifts available this holiday season.

BATMAN VOL 03 DEATH OF THE FAMILY HC - £19
Scott Snyder and Greg Capullo's work on the Caped Crusader has been sublime - possibly the best thing in the New 52 (other than Green Lantern and the new Batman/Superman) - but the Death of the Family is arguably the storyline their run will be remembered for above all else. Featuring the return of the Joker, sporting a horrific new look. This decaying, strapped on, and stapled into place visage is immortalised on the front cover of this limited edition hardcover collection, thanks to an acetate dust jacket of his face which peels of to reveal the bare flesh underneath. When these are gone, they are gone, with DC pledging that any subsequent print run will feature a more mundane glossy paper cover rather than this deluxe acetate rendition. A truly gruesome and unique collectors item that will make an excellent gift. 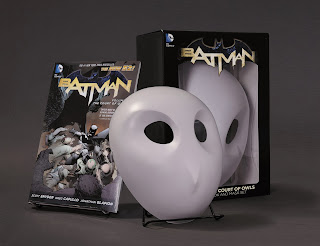 BATMAN VOL 01 THE COURT OF OWLS
BOOK AND MASK SET - £19
For anyone who missed out on the start of Snyder and Capullo's run on Batman, this is the perfect introduction! This box set collects the graphic novel of that first story arc, introducing the Court Of Owls - a secret society that have moulded Gotham from the shadows for over a century and can no longer ignore the interference of Batman and Bruce Wayne. They unleash their assassins - known as Talons - to hunt down the billionaire vigilante as the city Bruce calls home reveals a dark heritage that had hitherto remained a mystery to the World's Greatest Detective. Accompanying the graphic novel, is a replica of the Court Of Owls mask as worn by all of the members and even their children, a chilling sight to behold. Another superb collectors piece and a great gift for the Batman fan in your family.

GREEN ARROW YEAR ONE TP - £11
From one billionaire vigilante to another! With the Arrow TV series capturing the imaginations of many of my customers - myself included! - here's the perfect gift for fans of the new small screen adventures of Oliver Queen. This self-contained graphic novel is illustrated by Jock and written by Andy Diggle, for whom the character of John Diggle was named in the TV series itself. Retelling the origin of the Green Arrow, from his ordeals on the island through to his return to society, the book also features recognisable villains such as China White, but it's still very much it's own story. Arrow's writers credit the book as a major source of inspiration for the tone of the show. Suffice to say, if you only buy one Green Arrow graphic novel this year, make it this one!

WE CAN BE HEROES JUSTICE LEAGUE ACTION FIGURES 7 PACK BOX SET - £100
Superman, Batman, Wonder Woman, Green Lantern, The Flash, Aquaman, and Cyborg - the Justice League of the New 52. Seven DC super hero figures - normal RRP £23 each - in one beautiful box set for over 50 quid less than the combined price of all seven figures if purchased individually? In the words of Kevin Bacon, that's a no brainer! But it's better than that! 10% of the RRP of this box set is donated by DC Collectibles to DC's We Can Be Heroes giving campaign designed to increase awareness and raise funds to provide relief for the drought and famine in the Horn of Africa. 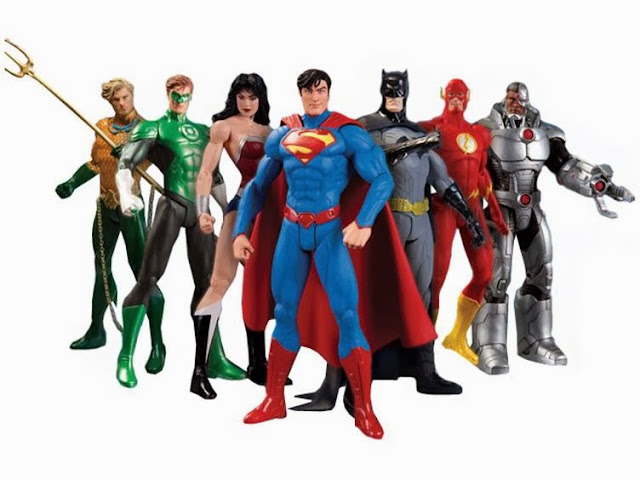 DC NEW 52 SUPER HEROES VS SUPER VILLAINS 7 PACK AF BOX SET - £100
Another no brainer, seven figure box set from DC Collectibles, this heroes vs villains set is a grudge match that can barely be contained by the very box they're in! This set includes Aquaman, The Flash, Batman, Catwoman, The Joker, Captain Cold, and Black Manta, many of which feature all new redecos, or in the case of Aquaman a whole new head sculpt. On top of that, the Catwoman is a brand new figure, unique to this box set. 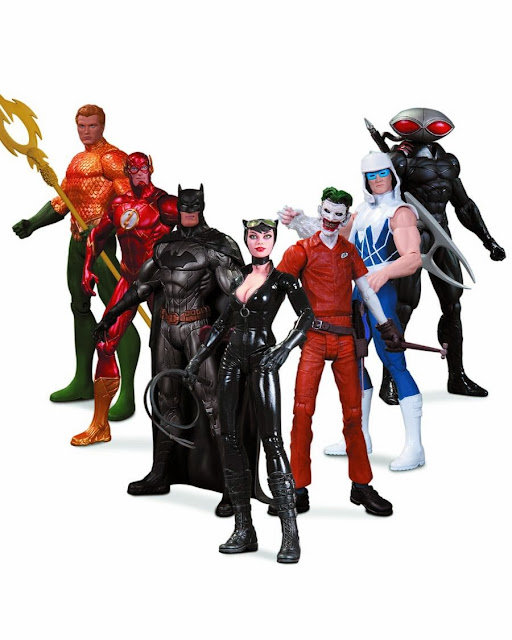