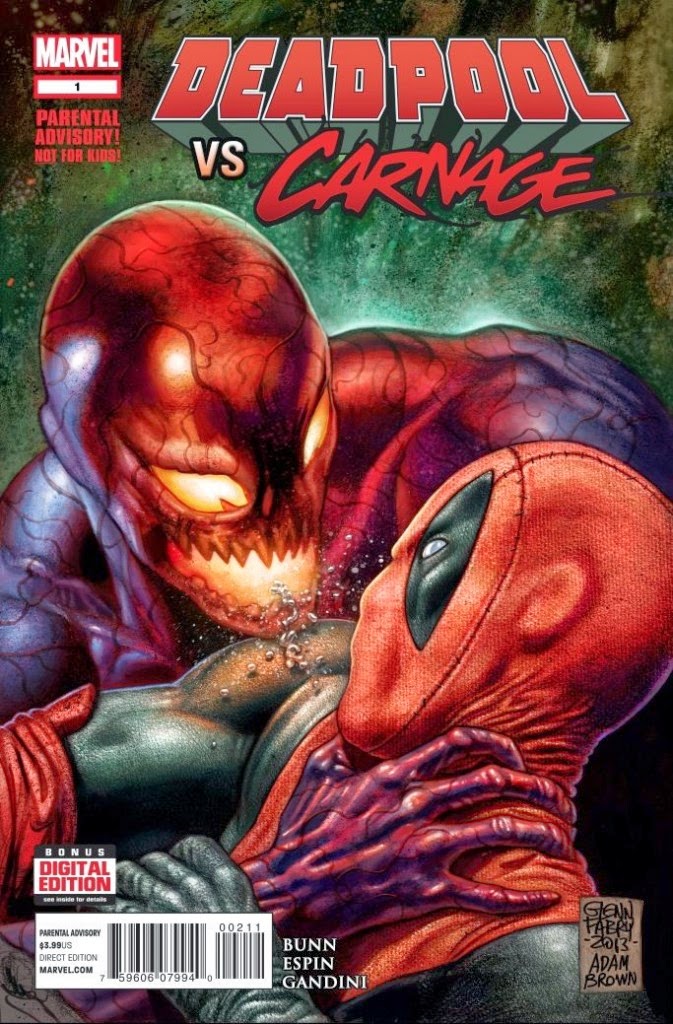 So after fighting off the reanimated corpses of a town and essentially cloning his personality, or being forcibly made to attach to the body of a cerebrally affected wheelchair user, what does happen when you place a homicidal psychopath in the sights of another homicidal psychopath?

Cullen Bunn finds out in this new title with two of my favourites.

Leading up to this comic both characters have had a little bit of a make over. Carnage has been through the ringer having a new host in Superior Carnage, an offshoot of Dan Slott’s Superior Spiderman and Deadpool has just finished the short The Walking Deadpool (aka Night Of The Living Deadpool). In addition to that, psychologically there’s been change. I don’t think Carnage has been closer to Cletus Cassidy (if you can consider them two separate beings anymore) and Deadpool has lost the voices in his head and banter with the audience. So what is Cullen Bunn going to do.

Quite simply put the phrase “It takes a thief to catch a thief,” is particularly apt so long as you liberally substitute the word thief for alternatives such as unhinged loon or crazy murderer. After a fifth consecutive killing spree, Carnage is prime time news. Taking cues from where they appear, Deadpool takes on a quest from an imaginary higher power, feeling that he is the only one qualified (or deranged enough) to track down and finish Carnage off. 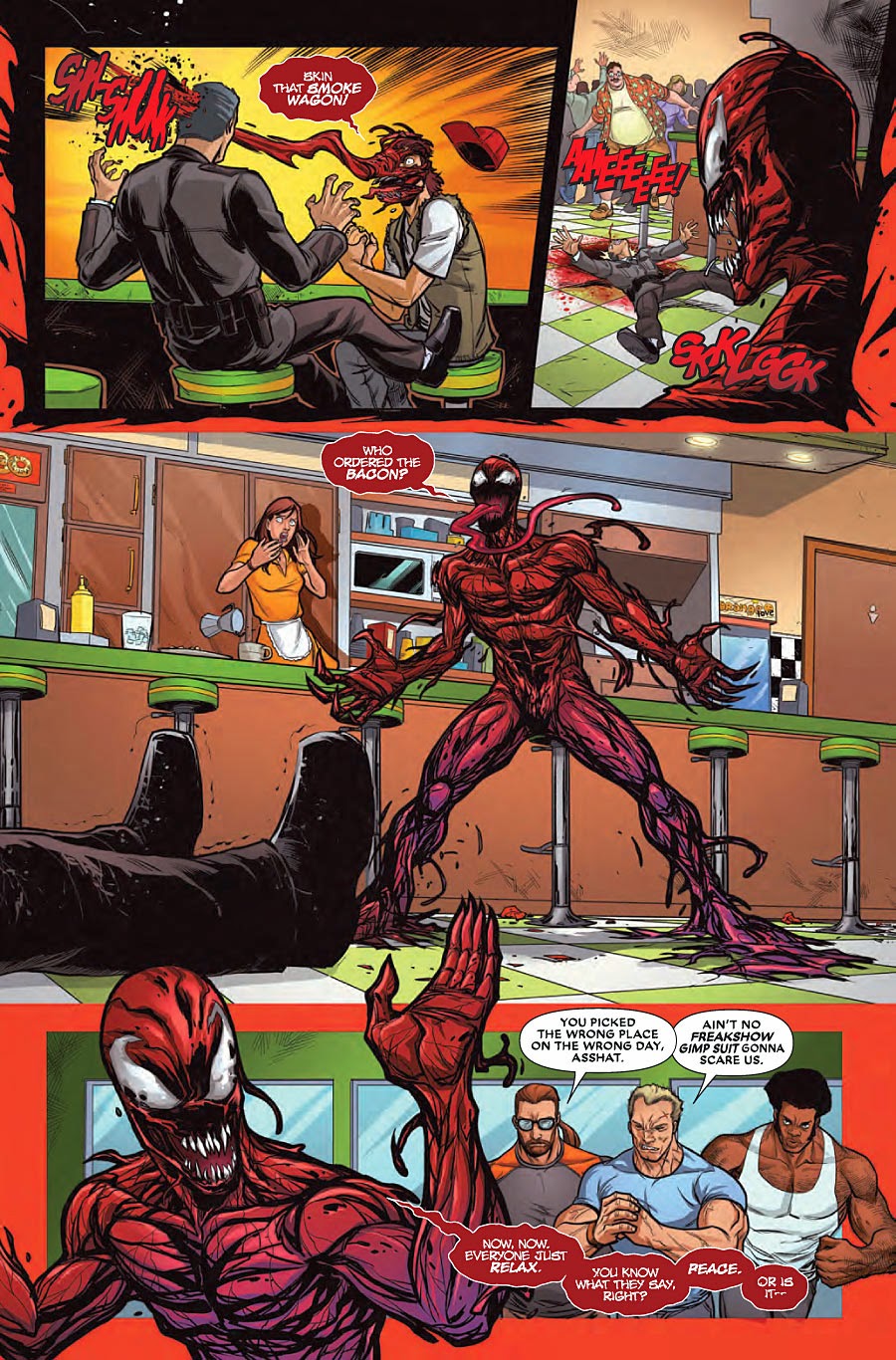 Let’s be honest here too, when Deadpool applies himself to a task we all know he will possibly pull it off. We also know that he will do it in his own emphatic style and kicks off his scrap with none other than a bloody big rocket. What ensues next could be akin to when he fought against Wolverine. Two “super” beings fighting and tearing strips off each other and the strips then grow back, only this time it has a dash of idiot and sprinkling of madman added to the mix.

In comic and comedic style, the fight carries on and Deadpool looks like things are going his way, until an extra unexpected symbiote also joins the fray.

From a fan point of view I think the character mix is good, normally I wouldn’t complain especially when Shriek (one of the lesser known symbiotes) arrives, but my issue was with the portrayals that I’ve come to associate with them all. Deadpool still feels a little neutered without his internal and multi-personality filled monologue or crowd baiting banter. 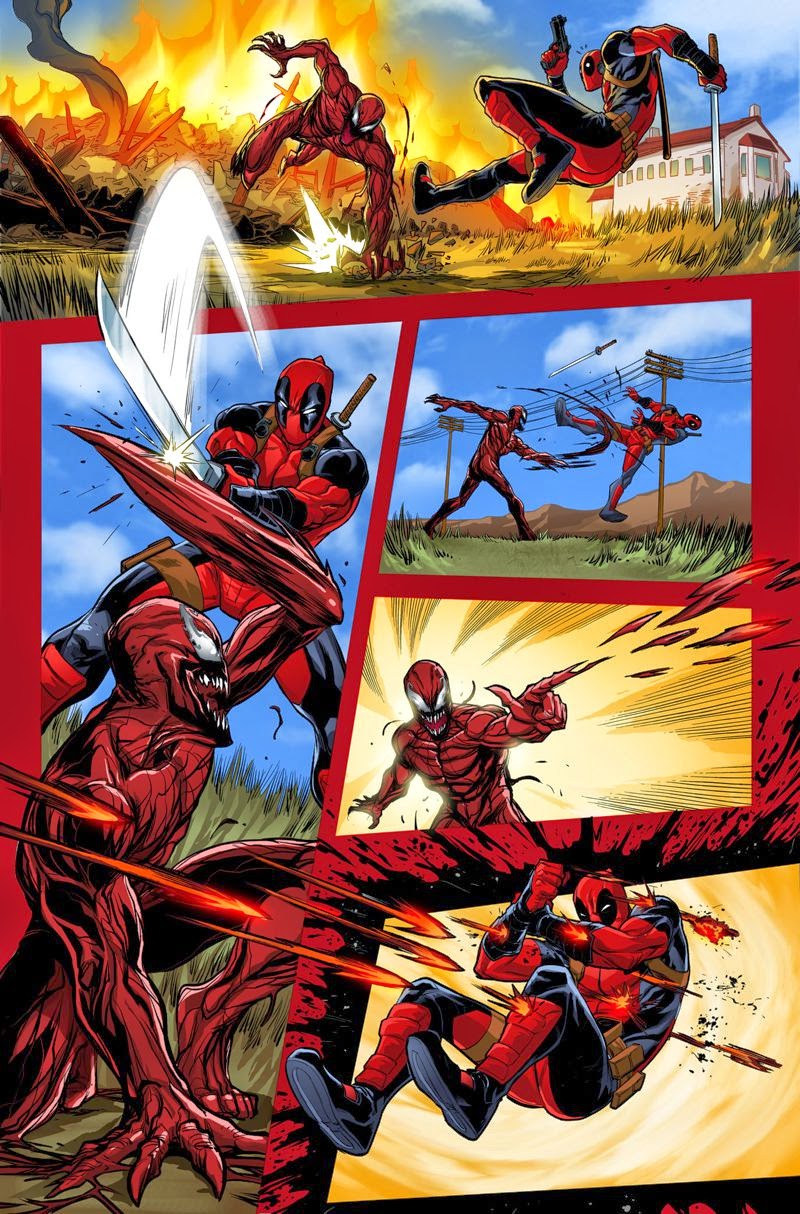 Carnage on the other hand was more crazy loony mad than the crazy scary mad I’ve come to know from the recent Carnage storylines. It almost felt like he played up to what Deadpool can be. Even Shriek had lost her clinical edge, but then again that could be a natural evolution of character progression. Storywise though it is very amusing and hits a funny bone straight off. This does put it predominantly in Deadpool's court and I think fans of him will appreciate this more than maybe Carnage fans.

Artistically Salva Espin has also hit home with a very comfortable Deadpool style, with punctuated characters that stand out and colouring from Veronica Gandini that makes the frames stand out, including the almost trademark coloured speech bubbles. There’s even a cheeky little visual gag when Wade is growing his fingers back. The cover art (Glenn Fabry & Adam Brown) was almost made to feel too clean, concise and detailed as a result. It’s great to see the effort put in where the stitching and fabric can be seen on Deadpool mask, but is that too much for this title?

Put it all together it’s a fun comic and one Deadpool fans should love. The Carnage lover in me doesn’t find it gritty enough especially when comparing it to things like Carnage USA (Wells/Crane) from a couple of years back but then again maybe Cletus needs to be a little relaxed once in a while.

Matt Puddy has his nose back to the grindstone.
Posted by Proud Lion at 12:00