There is something special about getting a comic to review that you know very little, or even nothing, about before picking it up. Okay, you might recognise the writer or artist which certainly does alleviate some of the casual awkwardness when your editor hands over a shiny copy for you to thumb through, but outside of that the contents are still a (hopefully) pretty mystery.

So this is the position I was in when my editor handed me over a copy of Powers by Brian Bendis and Michael Oeming. All I’ve got to go on is the cover image and the thoughts that you can’t really go too far wrong with Bendis at the helm.

Now my first mistake was that I did, for once, judge a book by its cover. In my day job I travel around a fair bit and find myself on a train heading for London while reading the issue and writing this review. BIG mistake as after reading it I realise that there is an almighty 15 year history behind this title which has culminated presently in this series launch, as well as a new live action series being launched on the Playstation Network in the near future.

Not only has this made me realise how big this is now but also how powerless (pun intended) I feel when it comes to writing about this a fun and engaging title.

Powers is set in a dark crime noir city in a time when new and almost random powers are emerging daily. Whilst this may seem like a good thing in some people’s eyes, this isn’t necessarily the case and the upshot is that there is more trouble than good from it all and that there is a requirement for a special type of person to police it all. So here we meet Deena Pilgrim, a cop with a specific knack of taking down Powers and making the streets safer in an evolving time. 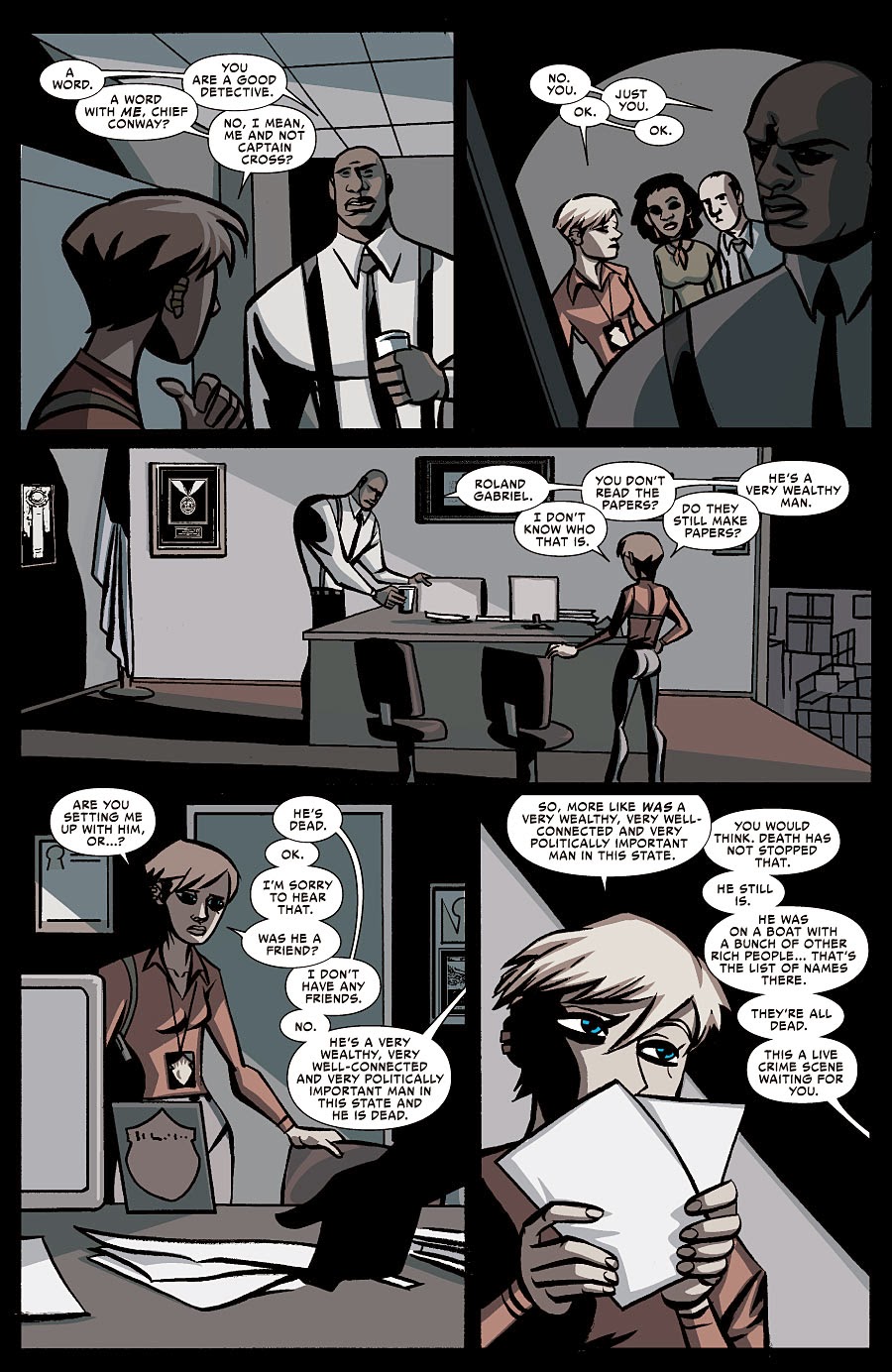 Pilgrim - aside from being a strong detective - is in a period of change herself as she becomes a media icon from the launch of her book. This - along with her skills - put her and her partner firmly in the limelight when it comes to investigating a multiple murder case on a boat. A well known politician and all of his clientele (similarly wealthy figures) makes for a very high profile case and even more so when it comes to light that they all apparently died because their genetics seemed to have just “stopped”. With powers being the mainly contended weapon of choice it’s up to Pilgrim to solve the case.

Across town in a dimly lit room we receive the humbled argument of a Police Captain imploring an, at first, unknown man to help in the growing situation. Finally we are presented with Christian Walker, Pilgrim’s former partner and the other part of this winning combination – even if he does have to be found in a super-themed strip club.

Walker, by the way, has a fantastic back story leading up to this point and although he is a non-powered cop now he most certainly wasn’t in his incredibly long (think dawn of time!) past.

As a new reader I found this issue one for scene setting and introductions. As I said I had no previous knowledge of the comic but I felt very comfortable reading it and how it moved and flowed. Without spoonfeeding the reader, you get a good sense of characters and that there are broken or flawed elements behind them giving them depth. You can imagine my pleasant surprise when I then read up on the history of this title and now as a result want to get my paws on the full back catalogue. I’m also slightly envious of those on the Playstation Network who will see Sharlto Copley take up one of the lead roles in the new series. From this comic alone I’m looking at investigating this when I get a chance.

The artwork from Oeming is very much in feeling with the comic. Playing heavily on the noir aspects as well as bold characters, it captures an almost Sin City meets Scott Pilgrim feel to it all. Clearly time has been taken to develop the sense and feeling of the look of it all along with the story. Sadly this is something I feel could be lost with the TV series, but that is yet to be seen. 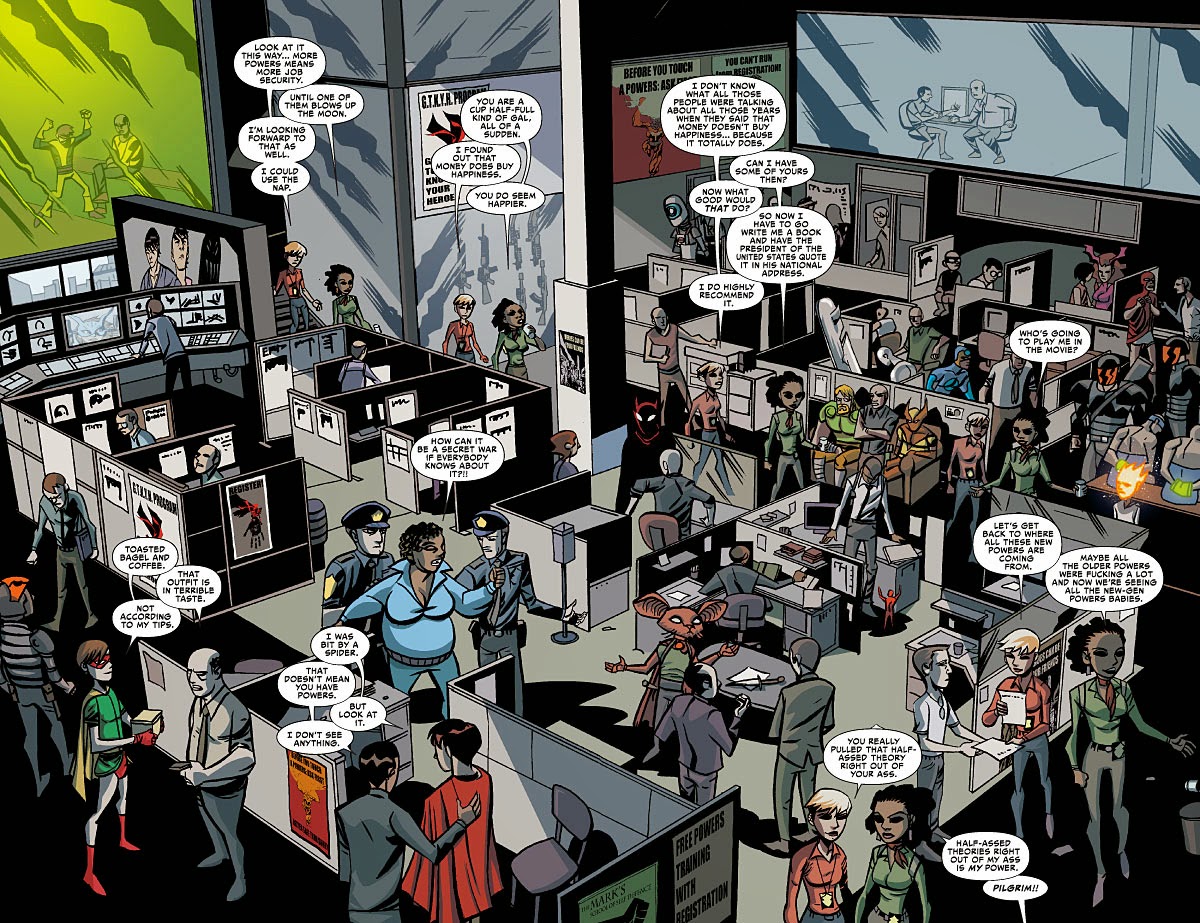 The characters have an exaggerated yet archetypal feeling to them, but that doesn’t mean that there are some occasional nods or jokes snuck in there too. Currently on Marvel's Icon imprint there is a sneaky wink at Spider-Man in one of the images, as well as keeping a fairly adult feel to it all as well (which has also been carried into the TV series).

This has been a fun comic to read and certainly grabbed my interest. I would suggest that people jump on board with it now and also, from what I’ve read, try to get hold of the trade paperbacks while they can too!