Being Spider-Man over the years has not been an easy thing to do. Parker has been cloned, confused over his own identity, half-killed more times than he can imagine, and finally had his whole body stolen and joyridden around by one of his archenemies in Superior Spider-Man. 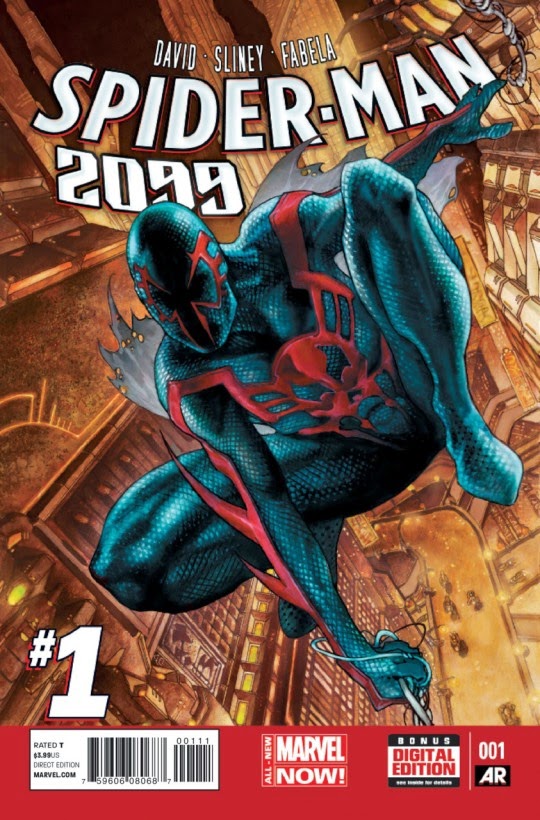 So how can things get worse?

Luckily for Peter it’s the Spider-Man name that is taking the brunt of it, and it's not him who has drawn the short straw, but the Spider-Man from 2099, one Miguel O’Hara. For anyone who hasn’t read Superior Spider-Man, in part of the series Miguel was sent through time to save his Grandfather and ensure that he went on to be born as a result. However, it now means he is stranded in the present with no plan, other than a desire to improve the horrid future he hails from.

The very first page is designed to put new readers at ease as they may have no clue who this character is. Miguel is not a descendant or relation to Peter Parker - in fact O'Hara got his powers through a genetic experiment. He is also accompanied by Lysa, a holographic assistant who helps him by providing information and analysis. I will be honest, it was at this point I did begin to wonder. Superhero from the future with knowledge of how the world is meant to turn out, coupled with an electronic counterpart. It sounds scarily close to DC’s Booster Gold. (With a soupçon of Continuum or *shudder* Time Trax. BF)

However pushing further into the comic, things do take a change. As opposed to the financially and egotistically driven arrogance of Booster, Miguel has more towards the typical self-deprecating Spider-Man style – especially when it comes to women. This may be a different man from a different time but it appears some things transcend the ages. 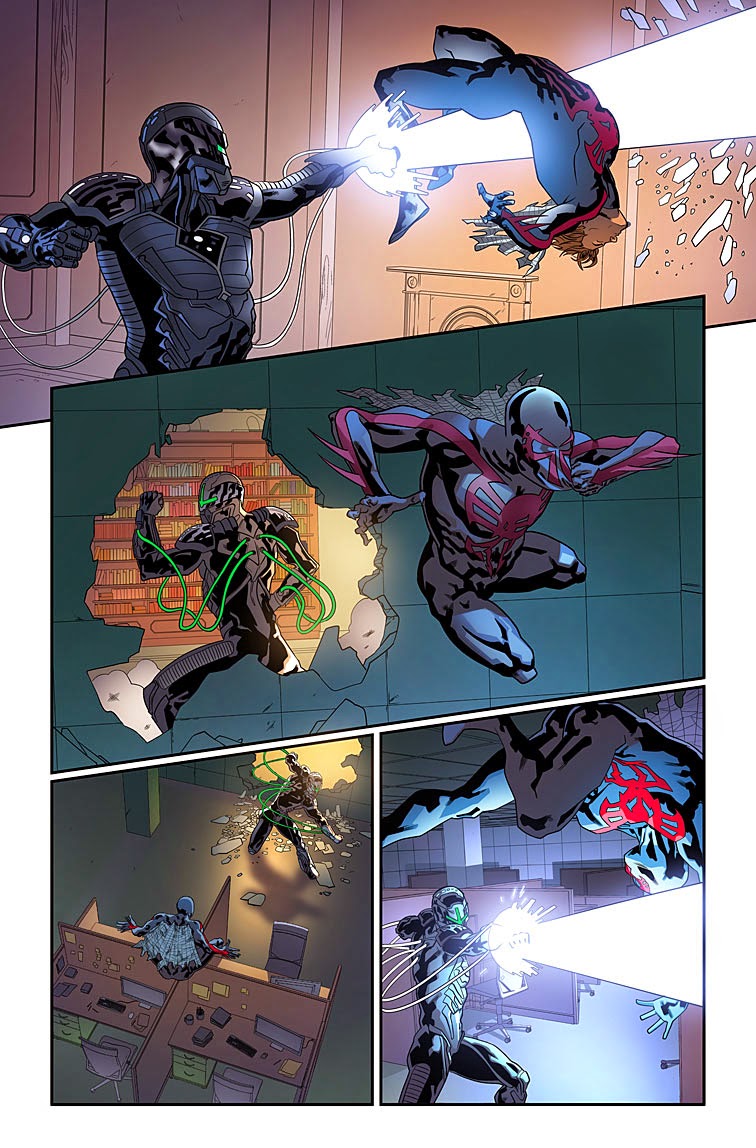 While Miguel is settling down and trying to establish what resembles a normal life, he is unaware of the danger arriving from the future in the form of an Adjustor from T.O.T.E.M. In essence this is the old chestnut of a temporal police force sent back to remove anyone who is in a time they shouldn’t be in (similar to Timecop or episodes of Star Trek Voyager), and this Adjustor has Spider-Man clearly in his sights.

The most interesting thing is that as their fracas spills into Liz Allan’s office, pulling her into the fray, and Spider-Man 2099 is presented with an offer. He can let her die instead so he can live and it’s all over. So what is an upstanding hero from the future to do? Well it’s maybe not what you expect, he takes the deal, but at least there is a plan in mind.

More importantly is what has Liz done to deserve such future rebuke, and why would it matter if only one of them survived? I’m sure there is more to come. To add further twists, refreshingly Allan is no slacker and quickly figures out that there must be some connection between her company and this Spider-Man, leaving him open to further attack.

Peter David is not a writer I have really seen much work of personally. In the past I know he is well known for the award-winning 12 year run on Hulk. Something I found interesting in his writing though is that the scripting has a real identity to the characters in all the conversational pieces. There has been a lot of consideration taken in just how they all speak, and they stay in their own styles. It’s not often I notice this, but it really stuck out in a good way for me. 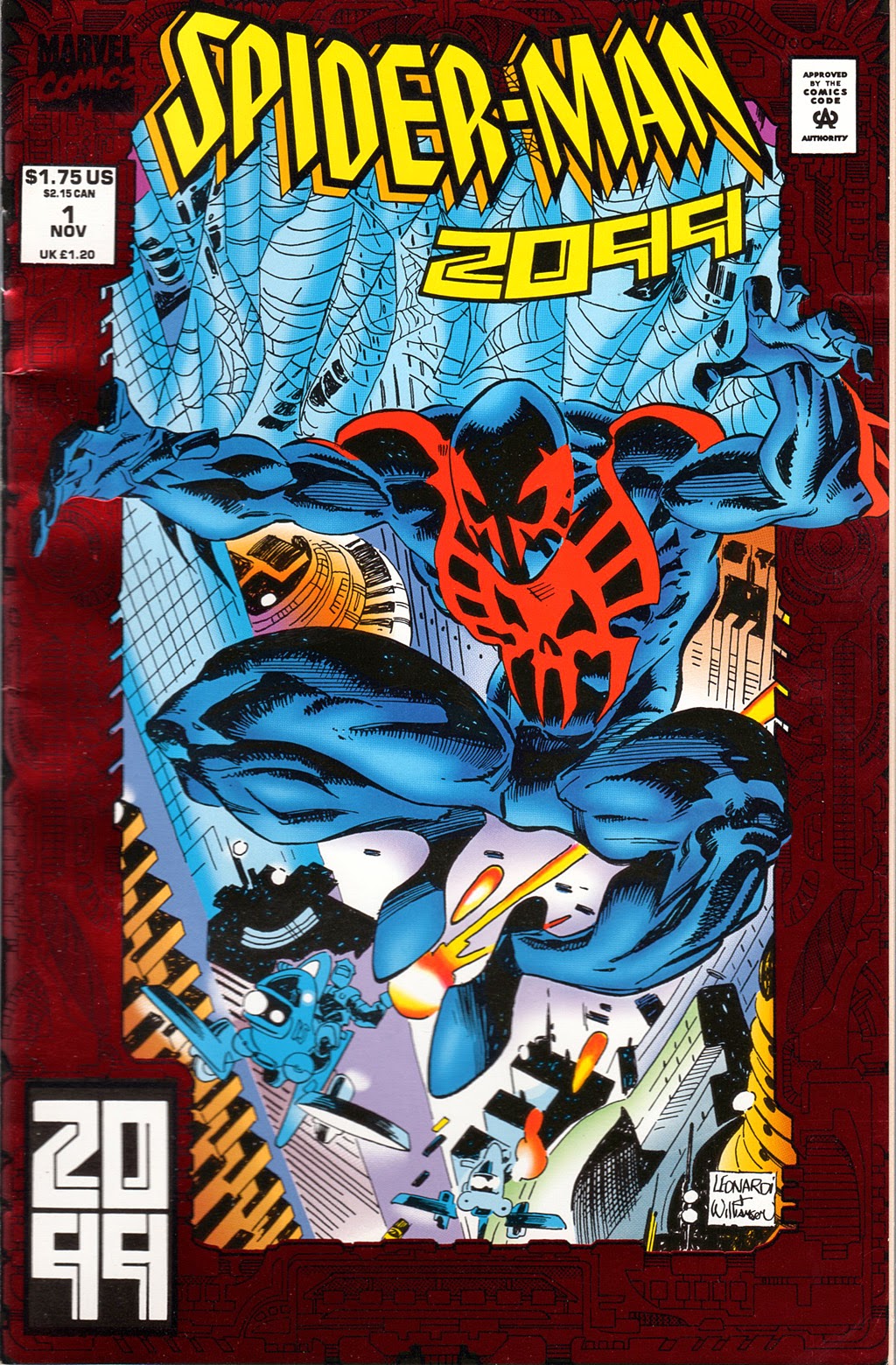 David co-created Spider-Man 2099 in the Nineties and worked on the original series that was set in the future. Following Dan Slott's efforts to bring Miguel to the present day, it's great to see Marvel let Peter David retake the reins to the character, creating a series that both follows the previous series for existing fans whilst remaining accessible to new readers. Take note DC, reboots are not the only answer! You can hook new readers with canny new pitches on existing characters, whilst remaining faithful to existing continuity. Ahem.

Artistically speaking, Will Sliney takes to the pencils. This definitely establishes itself as a Spider-Man title with the imagery being very “traditionally” Spidey. Sliney uses a lot of similar poses and images that have become a mainstay of the whole spider mythology, and that's no bad thing. There are some really nice extras too, such as the moment Adjustor comes into this time. The line work is fine as well, but in some cases the detail is somehow lost or just slightly off in some of the faces.

Put all together, you have the renewed face of Spider-Man 2099, all wrapped up in an interesting comic. This story is pretty much completely self-contained, but the ramifications can span a lot further. Spider-Man fans in general wouldn’t go badly wrong picking it up as there has already been a crossover phase and new readers can just jump straight on board now.

More over, Spider-Man 2099 fans will be kicking themselves if they miss this as Miguel O'Hara and Peter David are reunited once more!

Matt Puddy went to the year 2099. Not much as changed, but they live underwater, and your great-great-great-granddaughter is pretty fine.
Posted by Proud Lion at 10:00