I'm a big fan of card games, and have been all my life. There are plenty to choose from, no matter what kind of style you like to play. Looking for a comedic roleplaying, dungeon-crawling style game? Try Munchkin. A more serious, collectable card game? Have a go at Magic: The Gathering. Or, if you're looking for something that is easy to learn and quick to play, look no further than a game of Fluxx. This card game is wonderfully simple and incredibly unique - because everything in the game is constantly changing. Every game begins with the Basic Rules: draw one card, play one card, until a player meets the Goal. Players achieve that by playing Keepers that match those on the current Goal card, whilst avoiding Creepers, which often prevent winning. Action cards can be used for a variety of things, from trading cards with other players to allowing a second Goal card. However, that all changes as soon as someone plays a New Rule card, which can alter the number of cards that can be drawn, played, or held in your hand, amongst other things. Players can also play new Goal cards during their turn, completely changing the cards needed to win!


What makes this game so brilliant is the fact that it is constantly changing, and no two games can ever possibly be the same. Fluxx turns every rule on its head and creates a great challenge, but without being so confusing as to turn off players. One game is more than enough to grasp the concept and play confidently. 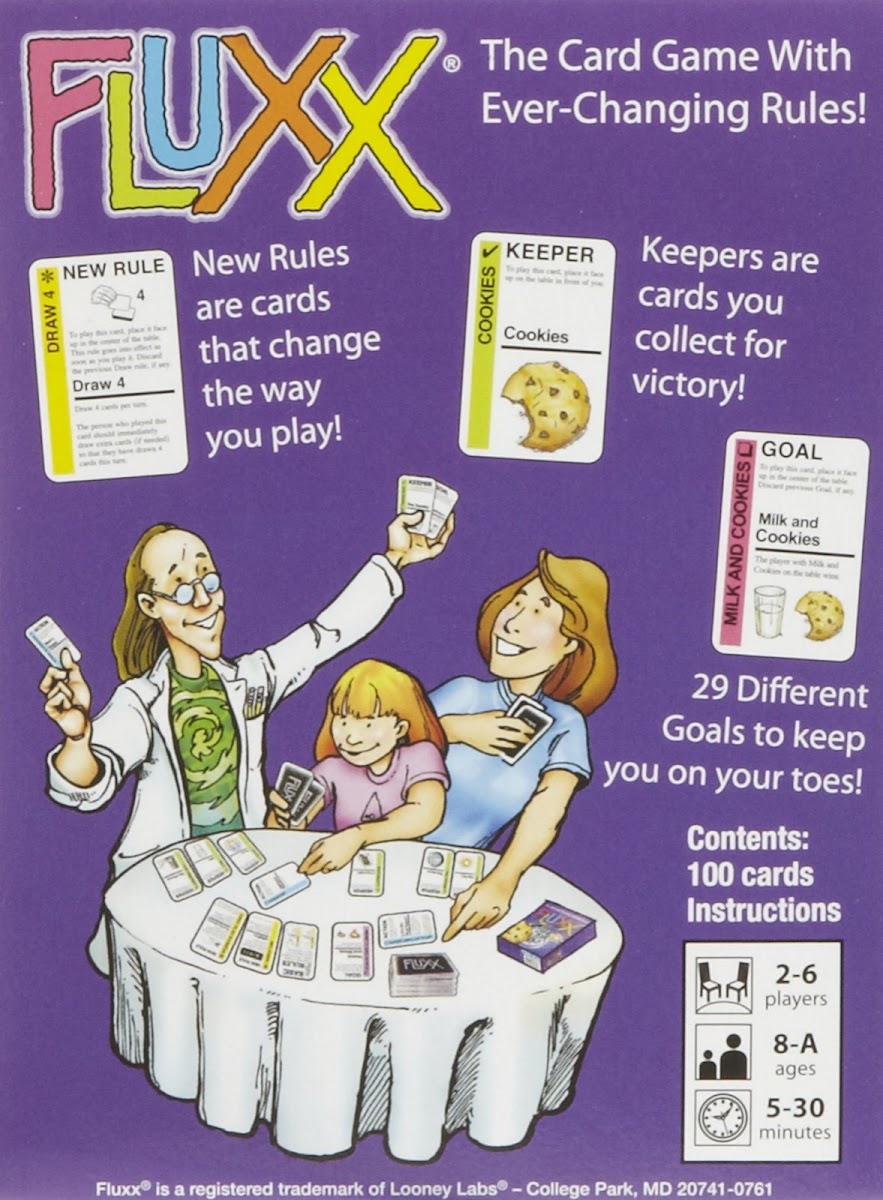 One of the things I find the most appealing is how even winning the game is flipped around. Most of the Goals require you to have played particular Keeper cards, as well as having no Creeper cards. However, a handful of Goal cards can only be met by having a certain Creeper card! This means you can be close to losing the game one turn, and winning on the next. Fluxx is the only game I've seen that's able to pull off this kind of turn around.


Better yet, if the original Fluxx isn't quite to your taste, you can take a look at the several other styles it's available in. Other editions of Fluxx include Pirate Fluxx, Star Fluxx, Zombie Fluxx, Monty Python Fluxx, and it's newest release, Oz Fluxx. Each edition is completely unique, and all of them have their own quirks. Some include Surprise cards, which can be played even when it's not your turn, or Metacards, which are New Rule cards that last for the entire game, but must be agreed on by all players.

Sadly, there is no longer a digital version of this game available. On the upside, you can always swing by Proud Lion and pick up a copy of this fantastic card game!